The oldest part of the Orloj, the mechanical clock and astronomical dial, dates back to 1410 when it was made by clockmaker Mikuláš of Kadaň and Jan Šindel, the latter a professor.

Later, presumably around 1490, the calendar dial was added and clock facade decorated with gothic sculptures.

In 1552 it was repaired by Jan Taborský, clock-master of Orloj, who also wrote a report on the clock where he mentioned Hanuš as maker of the clock. This was a mistake, and was corrected during the 20th century.

The Orloj stopped working many times in the centuries after 1552, and was repaired many times. Some speculate that the government purposely gouged out the original maker's eyes in order to prevent him from making a similar clock for another country. After this he died touching the clock, at which point the clock stopped working and remained unrepairable for a number of years. In the 17th century moving statues were added, and figures of the Apostles were added after major repair in 1865-1866.

The Orloj suffered heavy damage on May 7 and especially May 8, 1945, during the Prague Uprising, when Germans directed incendiary fire from several armored vehicles and an anti-aircraft gun to the south-west side of the Old Town Square in an effort to silence the provocative broadcasting initiated by the National Committee on May 5. The hall and nearby buildings burned along with the wooden sculptures on the Orloj and the calendar dial face made by Josef Mánes. The machinery was repaired, the wooden Apostles restored by Vojtěch Sucharda, and the Orloj started working again in 1948, but only after significant effort.

There exists a good deal of misinformation relating to the construction of the Orloj[citation needed]. For a long time it was believed that the Orloj was constructed in 1490 by clockmaster Jan Růže (also called Hanuš) and his assistant Jakub Čech. Another fictitious story involves the clockmaker Hanuš being blinded on the order of the Prague Councillors. 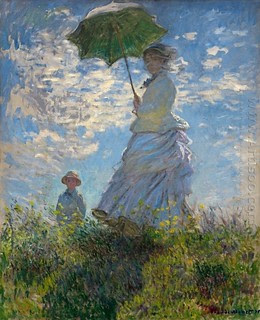 The Promenade Woman with a Parasol 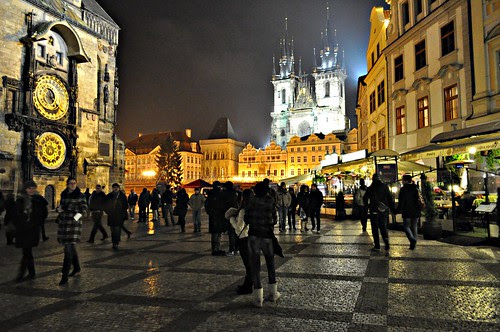